Vipāka (Sanskrit and Pāli) is a Buddhist technical term meaning the result of karma (Pāli kamma), or intentional actions..

An earnest life-coach/author, Thomas Carter, is mysteriously abducted by a deranged client, Angel Sanchez, who delves into Thomas’ teachings and uses his spiritual messages of Karma – action and reaction (Vipaka), against him to terrorize him and his family for their past sins. Written by Significant Productions 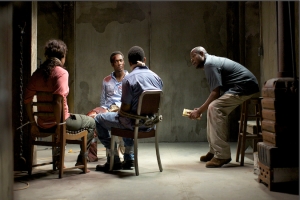 For the opening night gala of the Pan African Film Festival The movie Vipaka, starring Forrest Whitaker was shown. Taking place in New Orleans this Thriller was intriguing with well thought out and deep characters. I received word from much of the audience that it was particularly not the kind of film they would have liked to have seen to open up such an event… and I would agree only to the extent that it was not an African film per say. The subject was a very deep one that had many people thinking about their own actions, which I would applaud this movie for because I believe that is the point of a good story.

The main character in this movie, Tommy (Anthony Mackie) is a successful writer of a Self Help book based on a near death experience that he himself had. He is a guru and spiritual advisor to many… paving the way for Happiness and Prosperity. Or so it seems. I love how this movie really created a question as to who is “Good” and “Bad”, and more importantly it criticizes the work of many people out there today who write self help books that others thrive and put so much faith in. If faced with a life or death situation, would these people follow their own advice? Or crack under pressure and reveal their true fears and insecurities on the very words that they preach?

Overall I would recommend this movie to people who see themselves as “Spiritual” because it shows how only being a spiritual person leaves you open to accept anyone who preaches the morals you agree with to take your personal power from you when truly they have none of their own.